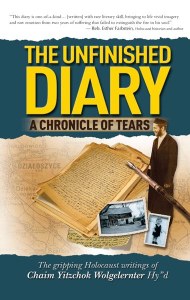 • This diary was crafted as a memoir — complete with chapter titles and a table of contents — by its author, a gifted writer and brilliant Talmudic scholar, while in hiding during the years 1942-1944. The events, recorded as the war unfolded, spring off the page with immediacy, urgency, and poignancy.

• The author’s extraordinary eyewitness account comes to an abrupt end, as he was murdered — only months before liberation.

• Saved from destruction, the diary lay untouched in a drawer for many years. Now, more than seventy years later, after undergoing painstaking transcription, translation, and research, the diary is finally being brought to light.

• The diary/memoir of Chaim Yitzchok Wolgelernter depicts the resilience and spiritual resistance of Jews during the Holocaust — as well as the attitudes and actions of the Poles, ranging from Righteous Gentiles to those who collaborated with the Nazis.

• Includes a fascinating postscript of the Wolgelernter family’s ultimate discovery of the unmarked grave of their father and other murdered relatives and the re-interment of the remains in Israel.