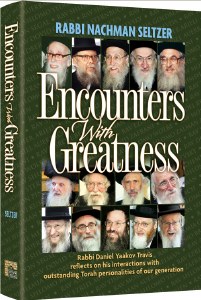 Rabbi Daniel Yaakov Travis reflects on his interactions with outstanding Torah personalities of our generation
Rav Shlomo Zalman Auerbach laughed with him, and cried with him.
Rav Shimshon Pincus showed him how much a "blatt Gemara" is worth.
Rav Don Segal taught him how to learn the "fifth section" of Shulchan Aruch.
Rav Shlomo Brevda gave him a personalized prayer.
Rav Shlomo Wolbe worried about his health, Rav Moshe Meiselman took him into his yeshivah when he could barely read a Gemara, Rav Dovid Cohen made his shidduch, Rav Asher Arieli shared with him the secret of Torah success.
And so many more: Rav Tzvi Kushelevsky, Rav Ezriel Auerbach, Rav Zalman Nechemia Goldberg, Rav Moshe Sternbuch, Rav Shlomo Yedid Zafrani, Rav Yisrael Belsky.

Rabbi Daniel Yaakov Travis met them, connected with them, loved them. And now he shares his encounters with them. Rabbi Daniel Yaakov Travis made a remarkable discovery after two terrifying brushes with death; being held in a chokehold by Brazilian gangsters intent on robbery and possible murder, and flying ten feet in the air after being hit by a car, coming down with a horrific crash upon the merciless pavement. With the Angel of Death hovering over him, and facing crisis after crisis even after his miraculous survival, he discovered a transformative truth: the vital importance and incomparable power of connecting with great men, poskim, masters of mussar, talmidei chachamim, and even gedolei ha?’dor. Therefore, in addition to becoming a respected posek, rosh kollel, and author, he sought out and built close relationships with some of the greatest men of our time.

In these pages, written with Rabbi Nachman Seltzer's trademark verve and passion, we will meet fifteen great Torah personalities, seen through the perceptive eyes of a man who made it his business to grow close to them.