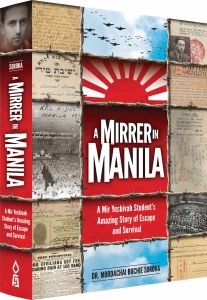 A Mir Yeshivah Student's Amazing Story of Escape and Survival
Shmuel Chaim Soroka, a talmid of both Rav Elchanan Wasserman and Rav Baruch Ber Leibowitz, was advancing in Torah at the famed Mir Yeshivah when war broke out. Through a series of astonishing miracles, he managed to escape the Nazis and survive three-and-a half years of suffering and deprivation in a Japanese prisoner-of-war camp, along with two other yeshivah bachurim.

Here is a story of heroism and determination, faith and belief, and an iron will to survive. It is a fascinating account of Jewish life under capture and of rescue by American military forces forty miles behind enemy lines. It chronicles the efforts of gedolim such as Rabbi Avraham Kalmanowitz, governmental officials such as Chiune Sempo Sugihara and Jan Zwartendijk, and relatives such as Max Simchowitz, with countless of other individuals and organizations, that combined to save Shmuel Chaim's life and finally bring him to America a year after the war ended.

Fully researched and authenticated through pictures, maps, and original documents, Mirrer in Manila makes history come alive as it reveals uncompromising perseverance and loyalty to Torah in the Pacific during World War II. Incredible but true, it enlightens, amazes, and inspires, with every turn of the page.