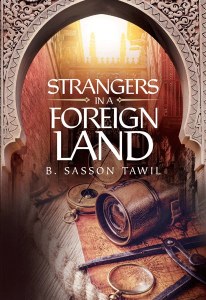 Strangers in a Foreign Land

A relative calm descends upon Seville, Spain after the Riots of 1391, but life has changed for the Iberian Jews and the Herrera family.

Eduardo meets his future wife at the wrong time. Or is it the right time? Hortensia wants her daughter to get married in a church.

Esmeralda yearns to see her one surviving relative in Portugal. Carlos sees only one alternative. Somehow, he must extricate his family from the relentless clutches of the evolving Inquisition.

Clinging desperately to their Jewish roots, the protagonists confront a destiny that forces them from one exile to another. Yet, a young, bright hope for the future shines through the pages. The story of the "wandering Jew" comes alive through a colorful array of fifteenth century characters that includes Castilians, rabbis, emirs, Moors, pirates, shaliachs, cartographers, sofers and pilgrims. Glimpses of Jewish life during the Middle Ages in Europe, North Africa and the Levant, and reflections on the connection between past and present, reveal the secret of Jewish continuity.