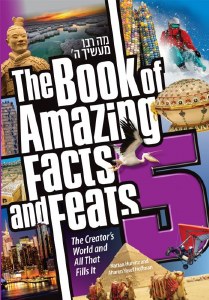 How was origami, the Japanese art of folding paper, used to launch a telescope into space? / What instrument can be played without being touched or blown into? / Is there such a thing as “Israeli food”? / How did Bamba, Israel’s quintessential snack food, save babies’ lives? / Where is the million-dollar Fenn treasure buried? / Which neighborhood is actually a cemetery and how much do people there pay for rent? / How many people have died since the world was created? / Who is buried in the Taj Mahal? / Do flying squirrels actually fly? / What type of creature was named after former U.S. President Obama? / How do ants communicate with each other? / Do vampire bats really suck their victims’ blood? / How can a person shoot around a corner without revealing himself? / Is the Dead Sea really the saltiest lake in the world? / How was the Ramon Crater (pictured below) formed? / What countries can be seen from Mt. Hermon? / Where is the Well of Miriam located today? / What makes Hula Lake a popular tourist destination? / Where is the world’s biggest nuclear waste repository? / How did the American government choose to warn future generations to stay away from nuclear waste sites? / What is the goal of “Earth Hour”? / Why are paper bags not necessarily better than plastic ones? / How is China choosing to cope with the unbearable odor from local garbage dumps? / How much food is wasted by the average American? / How long does it take for plastic to decompose?

Find out about these and numerous other amazing facts, all accompanied by hundreds of incredible photographs, in a format appropriate for the Jewish home, in this, the fifth volume of Amazing Facts and Feats.