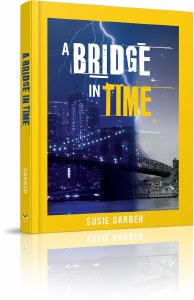 A Bridge in Time

“Tante Chava said not to go on the bridge when it’s raining,” Tuvie warned me. Suddenly, lightning slashed the sky. Another blinding flash of lightning. A loud explosion. And then — Tuvie saw it first.
“Move! Tali, move!” he yelled. A heavy wood plank was falling toward us. But my feet were frozen in terror. Tuvie tried to pull me away. Something struck my head. I felt a sharp pain, and then the whole world was tumbling around me…

While their parents are away, thirteen-year-old twins Tali and Tuvie are sent to stay with their elderly aunt. Tali resents having to leave sunny California and is terrified that her dark secret will be discovered.
When the twins sneak off to see the Brooklyn Bridge, they’re stunned to be transported back in time to the late 1800s.

Once there, they must cope with scarlet fever quarantines and frightening rumors that might prevent the bridge from being built. If the bridge isn’t finished in time, the twins won’t have a way to return to their own year! Will they ever see their family again? Talented author Susie Garber has created an exciting historical novel that weaves a fascinating story of illness, danger, and the building of the Brooklyn Bridge.