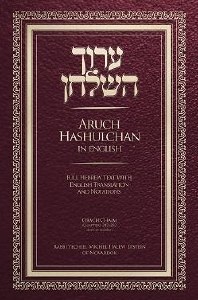 The Aruch Hashulchan, the monumental work of Rav Yechiel Michel Halevi Epstein, occupies a prominent place in the library of classic Jewish texts. Almost every contemporary halachic sefer cites the Aruch Hashulchan and contends with his opinions, testifying to the esteem in which this exceptional work is held. The original eight volumes encompassing all four sections of Shulchan Aruch were composed between 1870 and 1901. The Aruch Hashulchan was immediately acclaimed by the Torah scholars of the day and remains a standard in halachic literature.


With remarkable clarity, scope, and skill, the Aruch Hashulchan incorporates many different facets of halachic study. Relevant sources from the Gemara, Rambam, and Rishonim are explained and difficulties resolved with novel, straightforward explanations. He reports the rulings of the Shulchan Aruch and the Rema, as well as those of the Magen Avraham, Taz, and other classical commentaries, sometimes challenging their opinions. This masterful compendium of Jewish law also addresses practical halachic issues as well as relating to prevalent customs of the time.


For this new edition, the full Hebrew text and all sources were carefully reviewed. Obvious typographical and citation errors were corrected, and supplementary references were added.


The accompanying English translation is faithful to the Hebrew text with occasional clarifications, footnotes, and subheadings added to enhance readability.