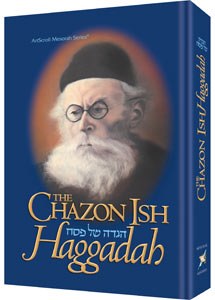 In the last hundred years, few names have inspired as much reverence and respect as that of Maran Hagaon Harav Avraham Yeshaya Karelitz, the Chazon Ish.

For most of his life, he succeeded in remaining anonymous -- his classic Chazon Ish commentaries on the Talmud and Shulchan Aruch were unsigned -- and he did not accept official positions. But ultimately he could not succeed. His greatness was too great to remain secret. When he settled in Bnai Brak, where he lived for the last twenty years of his life, the word spread, slowly at first and then irresistably that a gaon and tzaddik of historic proportions was in the Land. In the words of Maran Hagaon Harav Chaim Ozer Grodzensky, "a lion has ascended from Bavel to Eretz Yisrael."

The Chazon Ish was the soul of Bnai Brak and one of the primary authorities for Orthodox Jews in Israel and around the world. When Prime Minister David Ben Gurion wanted to understand the principles of Torah Jews, he went to the Chazon Ish's humble bungalow and came away awestruck.

In this Haggadah, we find the richness of his wisdom, Hashkafah, and Halachah. Going through the vast store of the Chazon Ish's writings and the literature about him, Rabbi Asher Bergman has compiled a commentary on the Haggadah and the gaon's halachic rulings and customs regarding the Seder.

The Chazon Ish Haggadah is a major new addition to the countless works that have been written about the Seder. Our era was blessed to have someone as great as the Chazon Ish in the forefront of some of the most tumultuous times in our history. Thanks to this Haggadah, we can have his presence to elevate and illuminate our Seder.