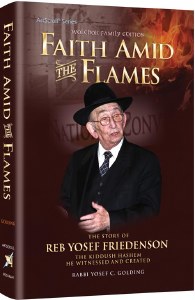 Faith Amid The Flames

Faith Amid The Flames
The Story of Reb Yosef Friedenson The Kiddush Hashem He Witnessed And Created
In this extraordinary volume, 3,000,000 Polish Jews speak to us - eloquently and inspiringly -- through the pen of Yosef Friedenson. “

"Reb Yossel" was more than a survivor, he was an embodiment of the precious Jews of pre-War Poland, and for 70 years he chronicled their lives and let them speak through his throat. He called himself a graduate of six institutions of Nazi atrocities and he was a "PhD" in the faith, kindness, generosity, and fortitude of the few who survived and the multitude that didn't.

This book is not a litany of atrocity and suffering. It is an uplifting narrative of the uncrushable Jewish spirit and optimistic confidence in a brighter future. Reb Yossel would often relate this illustrative incident. He was one of a group of slave laborers who were able to bake matzah for Pesach. Their "employer" saw them and shouted, "You are idiots! Eat bread! Your G-d has abandoned you and you still believe in Him?!"

No one dared answer. Suddenly Akiva Goldtshoff got up and said, "Sir, did you say that our G-d has abandoned us? Yes, maybe for now, but nisht totallah un nisht auf eibig - not totally and not forever!"

That was Yosef Friedenson’s credo. And for 70 years as the historian of Jewish heroism and faith in the future, he proved it. In his classic Yiddish magazine, Dos Yiddishe Vort, in several books, as one of the leaders of Agudath Israel, and as an exceptional lecturer, he told the story of spiritual heroism, the greatest and hardest form of resistance. Yeshivas Chachmei Lublin, the glorious community of Lodz, the Warsaw Ghetto, encounters with the great gedolim and lustrous laymen. ItÂ’s all in this wonderful book, all in the words of Reb Yossel as he brought 3 million kedoshim to life. The community will be deeply grateful to his children, Rabbi and Mrs. Yosef Chaim Golding, for gathering and editing this collection of their father's writings. He was unforgettable and this classic volume demonstrates why he was so revered in his lifetime and why his legacy will live on.